It took a long time, as I was moving my office in my house, plus she got a full nose job, but Teddy is at last finished! Note how the color changes according to the light.
Because her extra long tail is practically an extra limb, Teddy’s tail was made too, so you see her neck and head, and her tail, but never her body. She will use it to answer the phone, take down notes, etc. 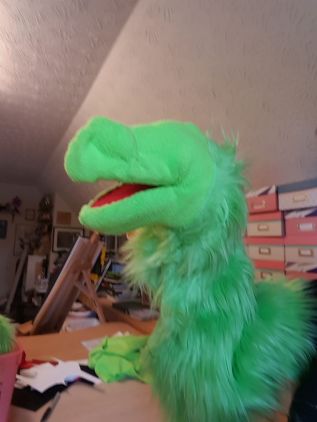 I meant to post this on the Fourth, and things got away from me.
In the world of Cam and Friends, many many different species of creatures coexist, going about their daily lives. Not everything is perfect, but they work out a lot of differences.
This quickie cartoon introduces Schultz, a German gryphon, and Everly, the two-headed unicorn.

Teddy is the adopted mom of the three main dragons in Cam and Friends, but she also crosses over into another project of mine, Weird Woids,which is a segment of Booger Holler Junction.

In Weird Woids, Teddy is at her desk at a yet-unnamed company (this is probably where she works in the Cam and Friends universe), busily working, when she gets a call from her unseen boss, Mr. Bigbottom, on her office phone. The boss always has some strange word, or “weird woid” he is struggling with that’s in a  letter or email he’s gotten and he needs Miss Tailybone’s help with it. Teddy seems to always naturally know the meaning of the strange words, which are indeed real words, and she explains them to her boss, usually citing some obnoxious thing he said in a meeting or goofy thing he did at a company picnic, or something Mrs. Bigbottom told her about, as an example. The boss gratefully (although a bit obliviously) thanks her for her help and Teddy sighs and gets back to work.

I wanted the Teddy puppet to be a lot simpler than her cartoon counterpart, and I really don’t offer any explanation except this:
Teddy is made to be similar to many other puppet dragons and reptiles from old TV shows, such as Ollie from Kukla, Fran & Ollie, Orville on The Popeye Club, and crocodiles in classic Punch & Judy shows. She is intended, in puppet form, to be a long neck with body unseen, and that neck just be all one fabric. Her head and face are not quite as detailed as her cartoon counterpart, either, and I’m fine with that. She pays tribute to these vintage puppets in that way instead of being perfectly “Muppet-like”.

Teddy in her cartoon form vs. puppet form.

She is coming together well! Her antlers are from a Christmas costume headband—I will not try to sew and turn something that can end up having such tiny extensions.

I had had a horrible week and simply didn’t have the energy to do a Sunday color. 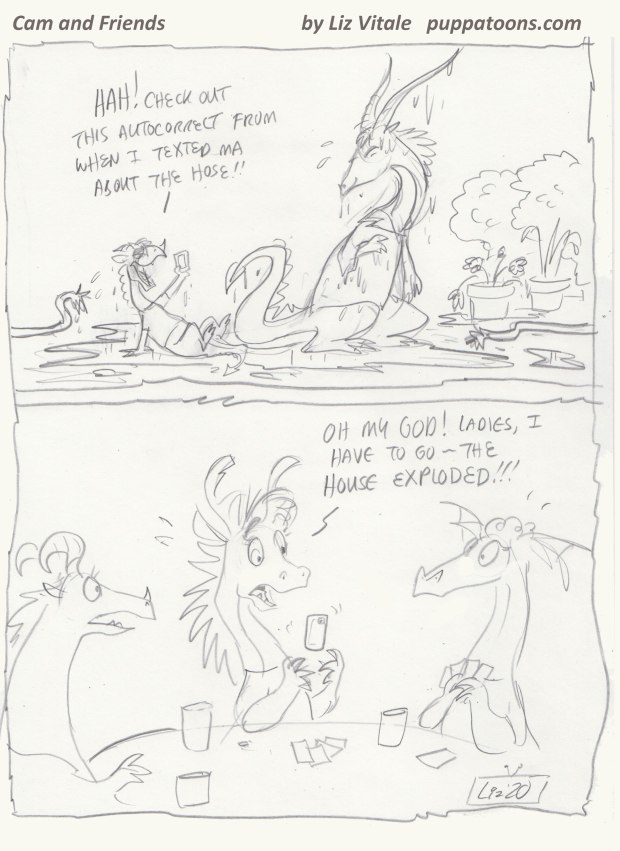 Teddy is a furry dragon that also appears in Cam & Friends. I like her so much I am letting her cross over into the Booger Holler Junction world. I was working on her head and got pretty far when I realized I didn’t have the materials to make her eyes or her antlers, so I put her aside for the moment.

But here are progress pics!

These are birthday cards I draw for friends, catering toward their interests and personalities. If I don’t know much about the person yet, Cam is usually just holding up a cupcake with a candle in it. 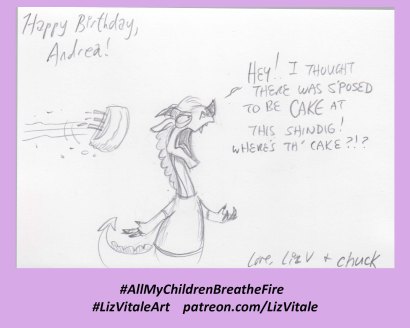 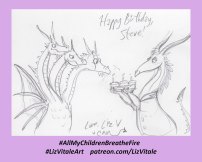 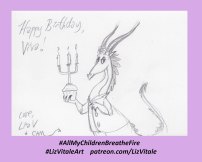 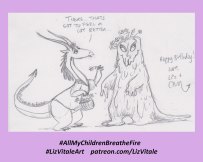 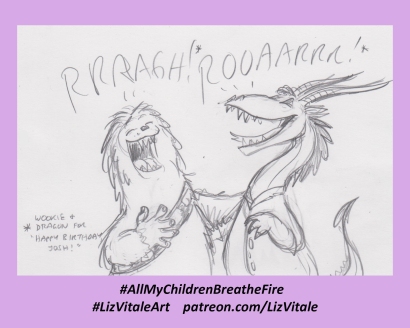 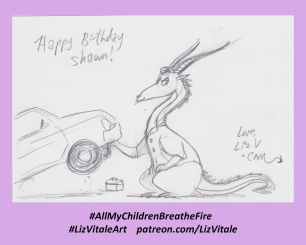 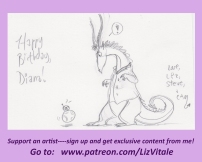 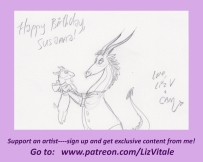 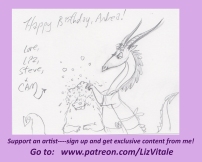 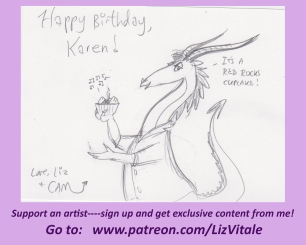 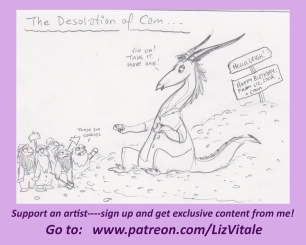 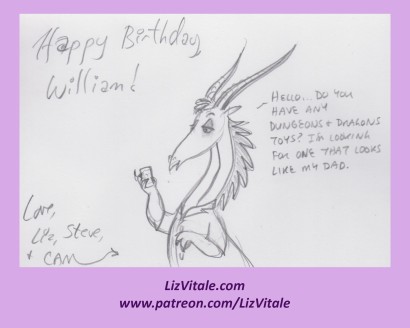 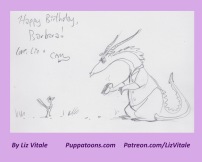 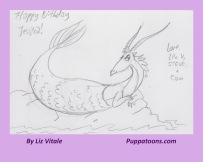 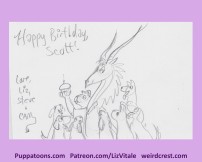 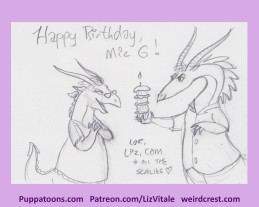 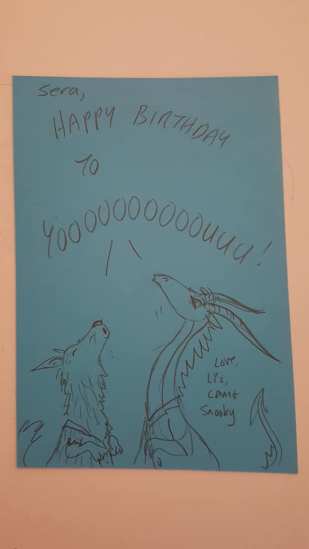 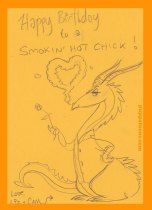 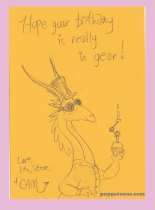 Replacing the human mom in the cartoon with a dragon mom has not been so simple. Since Mom was, essentially, me, I wanted the resulting dragon to be representative of me, even if not a direct caricature. In scoping out all the dragons and dragonlike creatures from cultures all around the world, I tried to find something I liked that was close to my own heritage. I began working toward creatures from Native American folklore, even if I couldn’t find anything specific to my own relations (Cherokee and Choctaw) I felt I was getting close. My friend Melissa pointed me toward the Mishupeshu, also known as the Underwater Panther, one of the most important of several mythological water beings among many indigenous peoples of the Northeastern Woodlands and Great Lakes region. Although it is never regarded specifically as a feline it has catlike traits, plus antlers, which were very important for me! (I always mutter that I wish I had antlers when I am in a crowd of annoying people)
The Mishupeshu also has an extremely long, prehensile tail, which I thought would be a really fun and different trait for one of my dragons to have. So, in still working out how Teddy looks, I have made her limbs much more feline, given her the long tail, and she retains her antlers she has had all along. She does not drop the antlers yearly, like a deer, however. It was nice to learn of a another dragonish species that was furry besides just my beloved Peludas, because I also wanted her to have fur. I think I’ve almost got her. 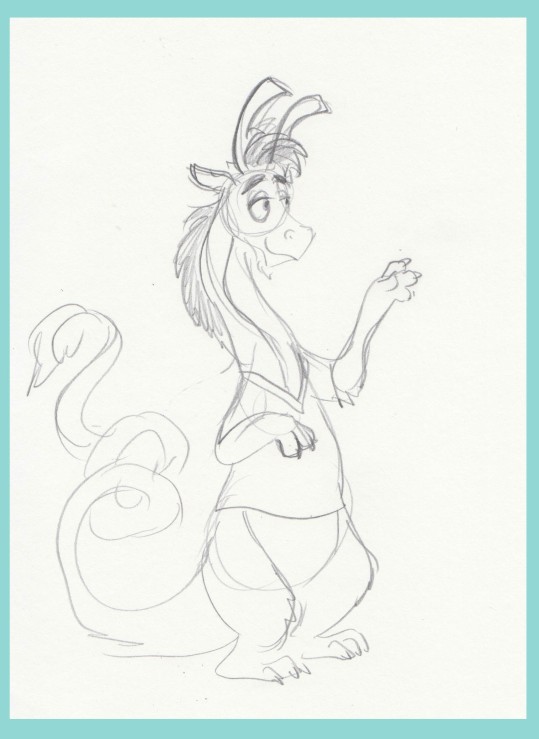 I am not 100 percent sure of this wolf’s name…but it is a female, and she will be a host for possibly talking about weird nature. This round of puppets I am making right now are going to be much smaller and more compact and simple than my previous creations–mainly because my performing abilities are limited right now as I still heal from surgery, and also,just because I don’t have a lot of storage space. I want to be able to open a drawer and several puppets can fit in there, not have to use big plastic bins with many one puppet each.