At my husband’s office (Turner Studios) there was a pumpkin carving contest. Our team creation won Scariest Pumpkin!

Here is it after bringing it back home…I don’t think it likes being in a box:

I LOVE lion dances! The athletic ability of the dancers is just…astounding. Yes, keep in mind every time a lion stands on its hind legs, that’s the guy in the back holding the head guy up on his shoulders.

And they are sill fine puppeteers through it all. he heads move and blink and twitch their ears,giving you the illusion that the lions are completely real….you believe!

Recorded on January 27, 2009,this was the lion dance performance at the Shatin Racegrounds prior to the opening day of races for 2009 – Year of the Ox.

Steve and I traveled to the Atlanta Botanical Gardens yesterday to view the scarecrows. I admit, I was prepared for the worst, after the staff,crowds,and weather mangled my entries last year. However,The Mummycorn was not only fully intact, but looking great. It was also in a spot in which certain photos made it look truly as if it were stalking through the woods! Check these out:

END_OF_DOCUMENT_TOKEN_TO_BE_REPLACED

September and especially October are my busiest times of the year, and I apologize for the lack of updates. I have been working on a Halloween show, as well as working at Netherworld and preparing for this year’s Scarecrows in the Garden, and now Zombiewalk 2010.

My entry for Scarecrows in the Garden this year is a mummified unicorn—The Mummycorn. This is a character I have tossed around for years as part of a book project called  The Carousel of Creeps.

About the size of a small pony, M.C. is covered in 13 yards of strips of muslin. The frame is once again PVC, but built a lot tougher than last year’s entries. 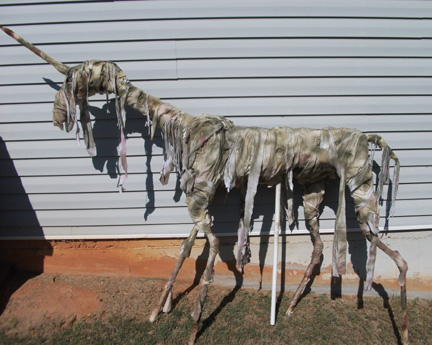 I designed him with the idea that he has walked endless miles and countless years in his current state. He’s shriveled and things like his ears and eyelids fell off long ago. He’s covered in dirt and stains from his centuries of wandering the earth, as well as his own leaked-out guts from ages past.

Mo has battled his way up the “most viewed” page and now sits at first place! I don’t know how long we can keep him there, but thanks to everyone who viewed the video! Click here to keep viewing and voting!

Thanks so much to everyone who has  made your view be a vote for Mo! At the time of this writing, he is up to 852 views!

I wonder if I could encourage my readers to  make your view be a vote for Mo? As of yesterday he was on the “most viewed” page and has passed several people. At the time of this writing he has 367 views.

I was pleasantly surprised and startled to learn that Mo’s submission to the “Help Flo, The Progressive Girl” contest was accepted and is currently on the site’s Most Viewed Page.C’mon, everybody, go take a look and make your view be a vote for Mo!

I apologize for the lack of updates, especially when Halloween is nigh; I have been very busy, and my late nights at Netherworld have thrown my system out of whack just a bit.

But, here is one of the goodies I’ve been concocting!

It’s a team effort by my husband and me; he brought home a little pumpkin from Turner Studios in order for us to decorate and/ or carve it for their annual contest. Well, once it was in my hands, and since eating things has been a big theme of mine lately, thanks to Mega Mouth, I came up with this. At first, it was just the Pumpkin Patch Poachworm swallowing the pumpkin…

But Steve carved the poor little terrified pumpkin and the piece took on a whole new meaning.

At the time of this writing it is on his desk at work, waiting to be set up in the display area.

Well, Steve and I finally went up to the Botanical Gardens to see how The Boys were doing. Fortunately, I knew what I was in store for since I’ve seen several photos online.

Considering what they’ve suffered, they look pretty good. We have had torrential downpours and flooding here, and I’m sure once their clothing gets wet, they begin to sag and flop. I think rough handling or their placement on the path might have played a part in their condition as well.

The four of them are almost right on the path, as in, you might knock into them as you walk by. Add to that that they are in the children’s garden area (which, I think Steve said, was a good choice since the more “fun” entries were all in that area anyway) and you have the situation of what little kids love to do—pull the pants off non-moving things that have pants. I had planned ahead for this, and the scarecrows all have multiple rounds of fishing line suspenders connecting their pants to their shoulders. They look like they’ve been roughed up a bit by the kidlets, like they’ve really given it the college try trying to pull those pants down. HAha! Foiled you!

I was not prepared for the mangled mess that was John. Poor guy, it looked as if he were picked up by his head (which I had put on signs on them to not do) and his legs came loose from his body. Maybe I didn’t glue them in strongly enough; I have no idea. But he fell over and was picked up by me no less than ten times during his construction, and his legs never came off. Who knows what happened? Anyway, the wrong legs had been re-attached–his legs were now on backwards, as you could tell by his shoes. Fortunately, since The Beatles  were so easily accessible on the path, Steve and I were able to carefully fix John back without stepping on any foliage. We tidied up the others–Paul looked as if he had been on his face at some point in time, as he had mud on his pants and jacket. Also, somehow Paul is bent over, but he looked fine, so we left him alone. 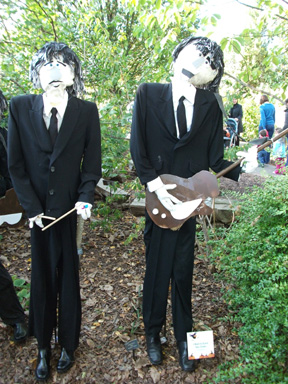 Ringo and George looked remarkably good. Yay for Economy Class Beatles for once! You can see the adorable  little sign next to George’s feet. 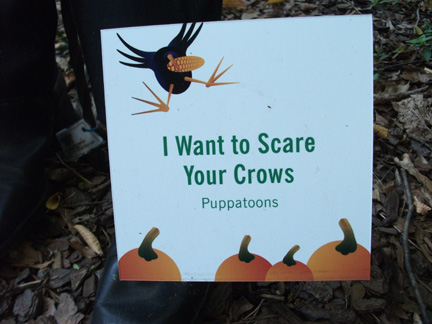 Isn’t it great? What was extra-neat was that people would see my display, exclaim, “Oh, look, it’s The Beatles!”. Then they’d see the sign, and start singing “I Want to Scare Your Crows”, and I would smile every time. Even while Steve and I struggled to fix John, people kept taking photos of them. Occasionally they would say, “I can’t get them all in the photo. Oh, look—we can go back there.” 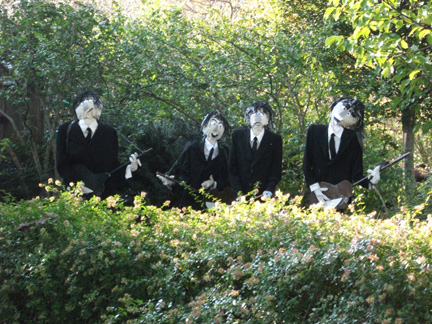 To get a good shot of  all four of them you definitely have to go on the next path. Two other people joined me as I took this photo–that was a good feeling.

So although I still look on them with the critical “artists’ eye”, and I was at the mercy of someone else setting up my display, I have to take Steve’s advice. He said, “You really should be proud of them–look how many people are taking photos of them, just in the short time we’ve been here.” I love my husband.

Steve also pointed out as we looked at other scarecrows–what materials were working, what weren’t, etc. And the themes–some folks had some very esoteric themes going on that left you scratching your head, while some were hysterical, and some were very thought-provoking.

All in all,I had a learning experience today, seeing the work of others, as well as seeing how my own stuff is faring. It was a good day.I’m already planning for next year. 🙂