Dear Little Pinson Spriggs (a caricature of my husband, in his Rebel Legion X-Wing Pilot costume) has been enlisted to fight the Warriors of Greenscreen!!
Actually, I am providing puppetry services for an independent film/music video, and today I was called in with a couple of requested puppets in my troupe to do some test footage. The producer hasn’t dealt with puppets before but was very keen on using mine, so we ran some puppets through their paces and the post-production team will sort out what they can and can’t do or something of that sort. I’m just the puppeteer!

Here on a site called Bumpworthy, you can see Dudebro playin’ it up, far out on the rings of a disco Saturn:

I had to post this old pic from 1996. I once worked at a wonderful furniture and imports store (while working two other jobs and going to school!) and the owner let me design all our handmade signs for the displays. He would give me a list of signs he wanted, then let me take home the list, posterboard and markers (which he supplied) and I would bring them in the next day.

One of my cats, Gray Baby, quite enjoyed helping in this task. She has long since passed, but I will always remember breaking into hysterics as Gray Baby went nuts on marker fumes.

Last night I won an award–not the full trophy award, but a certificate that I had been nominated for “Best New Puppet Actor” at our Netherworld Actor Awards. I do believe if I had worked more days and been a  bit more of a visible presence, I would have earned the full bada-bing trophy honor. Just wait till next year!

Even so,I am very excited and honored. Maybe it’s just a printed-out certificate, but for me it’s a badge of accomplishment and acceptance into the fold.

I’d like to thank my bosses, all my new friends,the wardrobe peeps,the paramedic who put ice on my face after I got konked in the eye,and of course, my big, barnacled,beautiful buddy,Mega Mouth.

END_OF_DOCUMENT_TOKEN_TO_BE_REPLACED 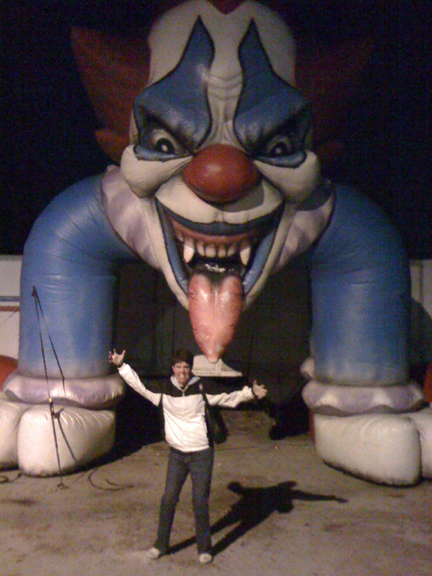 Stay away from Netherworld.

Check this baby out.

I spent my last night that I shoulda been working Mega Mouth in the break area, recovering from getting clocked in the eye. Some moron yelled “cowabunga” or something, and DOVE into the puppet’s mouth,completely slamming the entire mechanism backward and into my face,knocking me down. I worked 20 more minutes until someone came to check on me, and by then, I was staggering.Got quite the shiner to show for it! I waited for a couple of days to take a photo, so it would be at its most gruesome, with plenty of colors. 😀

If anyone is wondering, I did get back at the guy, a teenager, since he made the mistake of standing there afterward yukking it up with his friends. Although they couldn’t see me at all, they knew they’d done something “kewl” and were contemplating jumping on the puppet again. That’s when I managed to get up, grab the controls again, and totally smear the jackass against the opposite wall, taking a few of his friends with him.

Last night Steve and I went to Netherworld to get a few things from the gift shop, and also to let me see what the place was like on the outside when the show is in full swing(since I’m in my puppet booth all night, I never see what it looks like out front). My GOD, what a madhouse. It’s almost a complete separate show in itself. The huge full-body puppets, The Reaper and The Wraith, were out, as well as Lizard Man, The Boozy Clown,The Collector(The top-hatted character on the billboard), The Doll, and numerous vampires, sliders, and other assorted haints and frighteners. I forgot what their specific costume is called, but the best scaring going on was from the actors in ghillie suits, who simply looked like bushes. Once a guest got close enough, BAM! The actors would  jump out and clang their tin-can noisemakers together and the guests would jump out of their skin.

The line was immense; hundreds upon hundreds of people deep, no joke. The line snaked around the building, and the police were on hand to direct traffic and keep the crowd orderly, and they truly do an amazing job of keeping all that potential chaos under control. 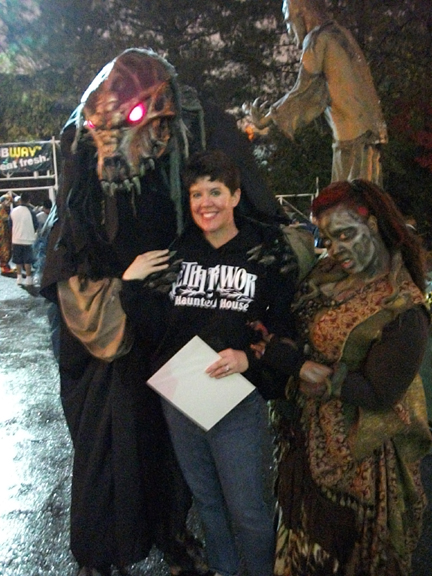 My buddy Derek was in The Reaper costume and came running to me (well, as fast as he could run) and CeCe(I hope I spelled that right) was his handler.

I also officially met Billy Messina, the other co-owner, who was out in the crowd and noticed my Netherworld sweatshirt I had proudly pruchased the other day. I had only seen him once or twice before, as Ben Armstrong has usually been the most visible figure of the two owners on the nights I’ve worked. Billy was extremely gracious and thanked me for doing a good job. Apparently word has gotten around.:)

I’m glad my body is finally going to have a chance to repair itself after such a strenuous work experience, but I’m really gonna miss these people till next year.:)

This is a very descriptive video just posted on YouTube about Netherworld. I have no idea when it was filmed or if I was working that night or not, but I recognize a lot of my new friends! I’m pretty sure that’s Ben Armstrong,co-founder, narrating. 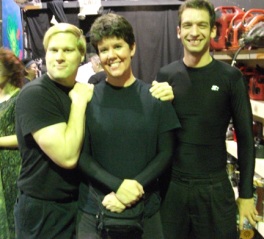 Derek, me, and Ethan–we were all puppeteers the night this was taken!

He’s big, he’s bad, he’s bilious and barnacled–he’s Mega Mouth, and for the past two nights at Netherworld, I have been in charge of him. I have loved this guy since my friend Jayne “introduced” us when I had my interview. Then it was incredibly cool to find out that he’s in Zombieland.

Like many jobs involving puppeteering, I must wear all-black clothing. This was no surprise and no problem—knowing I was going to get hot and sweaty, I wore my Under Armor. I wear this stuff under my TIE Pilot costume when I go Trooping with the 501st. It’s great at wicking the moisture away from your skin. I threw on a black t-shirt and shorts over it,and wore black socks and shoes. I also had Netherworld-issued items like black gloves and a “blackout” hood to put over my head, to conceal my head and face.

I’m still not sure Mega Mouth even has eyes. There’s something next to my head that sort of looks like an eye, but up close it’s just another dark cavity in his face. Eyeless things are creeeeeeepy.

END_OF_DOCUMENT_TOKEN_TO_BE_REPLACED 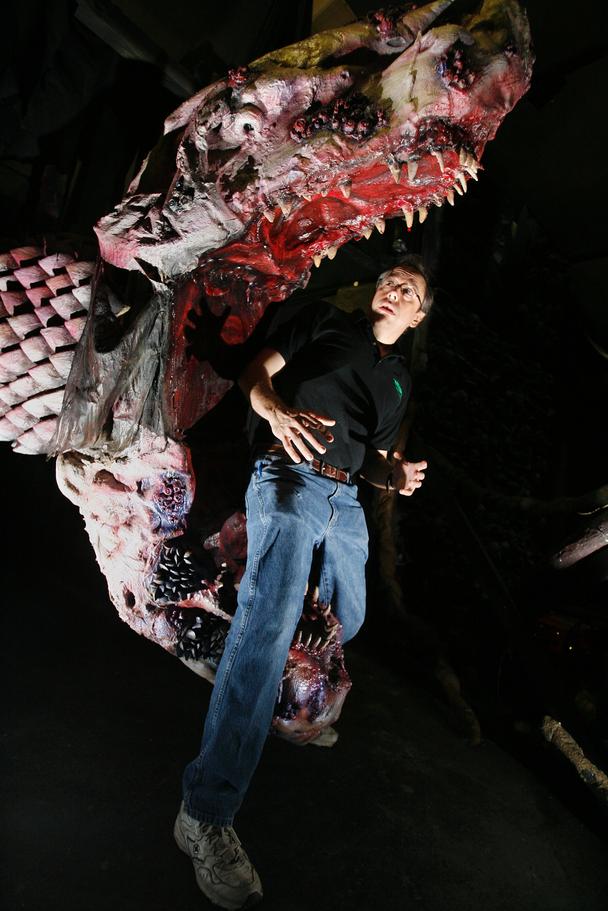 This is the puppet I’m hoping I will be working at Netherworld.

Mega Mouth was even used in the movie Zombieland. Apparently the movie’s special effects folks came to the owners of Netherworld for ideas and instruction on making proper zombies. I want to operate this big boy so bad I can’t stand it!